A truly afrofuturist world is one built on an influential past. This past does not need to be eurocentric, but rather revels in its afrofuturist standards and precedent. Its venerated sculptures, arts, and buildings are now steeped in African culture. The Empire State Building is re-imagined, now a stunning Nubian-inspired place of commerce. It holds the same impact as the new Golden Gate Bridge, adorned in Adinkra and kente. In this world, we ask: what are the new design standards that we venerate? And how do these new standards re-contextualize the present eurocentric word into something positive for an afrofuturist community?

Through the lens of Black Futurism, Designing in Color (DCo) has created a comic series that explores the power of an afrofuturist design sensibility to expand opportunities for spatial justice in reclaiming public space. Rooted in sacred spaces traditionally found in black culture, the comics re-imagine a place of worship, a place of entertainment, and a place of gathering into multi-generational spaces that celebrate emotional, intellectual and spiritual values.

Afrofuturism, as coined in the early 90’s by white author Marc Dery, is a highly intersectional means of imagining the future through black cultural lenses. The term describes a particular realm of science-fiction that is rooted in the history and tradition of the African diaspora. Mainstream proliferation of Afrofuturism was at its height following the release of Black Panther in 2017. The film depicted Wakanda, a utopian city of the future that had never been colonized, and as a result still practiced traditional African rituals. As Jamie Broadnax at HuffPost said, “The film wears themes of Afrofuturism proudly on its sleeve”. For decades, the U.S. has actively disenfranchised black communities, making it difficult to create networks and new progressive discourses. Afrofuturism provides an unapologetically black vision for a future society in which cities are more reflective of their multi-cultural roots.

When studying how social injustice has been proliferated in space for generations, urbanist Edward Soja, in his book Seeking Spatial Justice, argued that design and planning has an important, and inseparable, role in shaping a more-just future for our cities. Soja argues that justice has a geography and that the equitable distribution of resources, services, and access is a basic human right. The term spatial justice stands as an embodiment of Soja’s studies and has been an important tool for infusing socially-minded thinking into the architectural discourse.

One notable example of the merging of afrofuturist sensibilities with community building is the development of “Soul City”, a forward-thinking black neighborhood with a goal of ownership and empowerment in North Carolina. Founded and created by civil rights activist and lawyer Floyd McKissick, the project broke ground in 1974 and the master plan was designed by the all black firm Ifill, Johnson & Hanchard. Unfortunately, following President Nixon’s removal from office, all federal funding was pulled from the project. The short success of Floyd McKissick’s enterprise has been buried underneath what is now a correctional facility on the site – ironically an embodiment of the country’s mass incarceration system.

What is a sacred space?

By weaving the concepts of afrofuturism and spatial justice together, DCo seeks to re-contextualize urban public spaces by putting the values and identities of black culture at the forefront of their redevelopment. We are doing this primarily through the study of sacred spaces. For generations we have been taught the eurocentric canon of classical sacred spaces such as the Duomo in Florence, Notre Dame in Paris, and the Vatican in Rome. As afrofuturists, DCo would like to turn the public eye to historical sacred spaces from the African diaspora such as the Church of St. George in Ethiopia, or the traditional Yoruba palaces in Nigeria. In traditional African religions, rituals of social life are completely intertwined with rituals of worship. The religious heart of the community is also the social center of the community. Author Lungile Pato stated, “It has often been said that the African has a sense of wholeness of life. African world-view rejects popular dichotomies between the sacred & the sequel, material & spiritual. All life is religious, all life is scared, all life is of a piece.”

This deeply religious ‘wholeness’ has manifested itself in African culture through city planning and the architectural design of traditional sacred spaces. Ancient African cities of the Yoruba faith, such as Ile-Ife in Nigeria, were roughly circular in form and surrounded by a protective wall. The urbanism of the traditional Yoruba city was quite literally centered around the religious palace, or afin, in the center. The marketplace and residential compounds radiated outwardly from the center, showing the importance of religion as the central identity of the community. By designing the city as a sacred space, traditional African cities have exhibited that the seamless weaving of social traditions with religious practices resulted in strong, unified, and resilient communities.

Architecturally, the common historical elements of African sacred spaces are often rooted in religious practice and evoke a sense of awe. These spaces may also be described as being set apart from the ordinary world and contain sentiment, reverence, and a sense of justice. The Church of St. George in Lalibela, Ethiopia, described as a wonder of the medieval world, was built in the 12th century during the reign of King Gebre Mesqel Lalibela as an homage to Jerusalem. This exemplary African sacred space was constructed by excavating volcanic stone into the shape of a cruciform shaped plan. The processional approach that descends through the rock evokes an emotional experience that radically separates the space from its secular surroundings. In addition, the sacred is born out of the practice of rituals that have been observed in the church for generations.

In today’s contemporary culture, sacred spaces have taken on a diverse representation beyond recognized places of worship. As politically motivated citizens organize to practice their freedom of speech, we are seeing a recent surge in rallies uniting for/against social movements. After the tragic passing of artist/activist Nipsey Hussle, Los Angeles played host to a March for Peace which became a sacred space calling for the unifications of gangs in South LA. The march culminated in a memorial celebrating the eternal symbolism of Hussle’s Marathon Clothing Store for the Crenshaw community. In addition, murals honoring important historical figures become sacred spaces for disenfranchised communities whose local figures are seldom celebrated publicly. In Brazil and the Caribbean, the carnival parades are a sacred space in which the African culture claims the public space of the street and celebrates their roots through traditional dances, clothing, and meals.

In summary, our collective definition of a sacred space at DCo is one that successfully allows safe moments to happen that respects and celebrates emotional, intellectual and spiritual values. The comics and drawings below are a representation of our research and how these ideas can be manifested architecturally, through an afrofuturist lens. 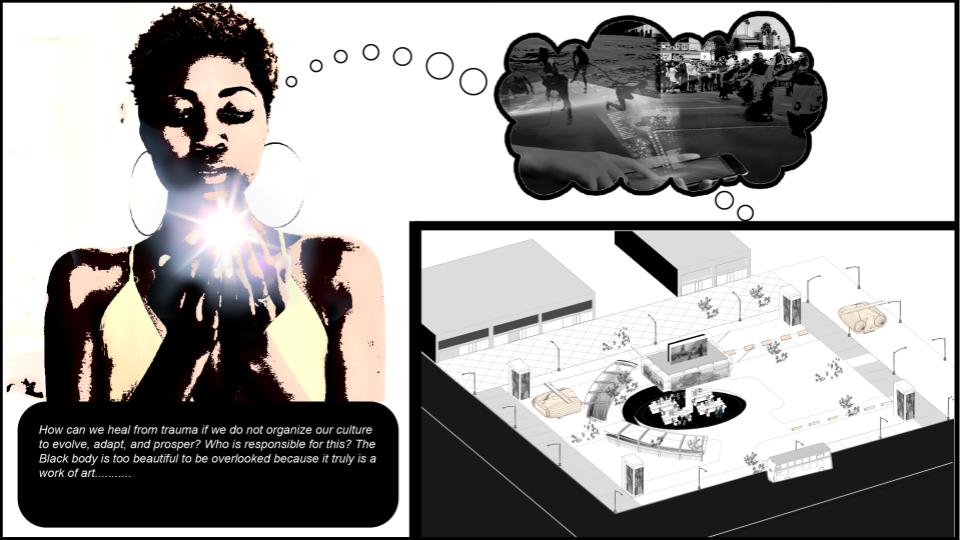 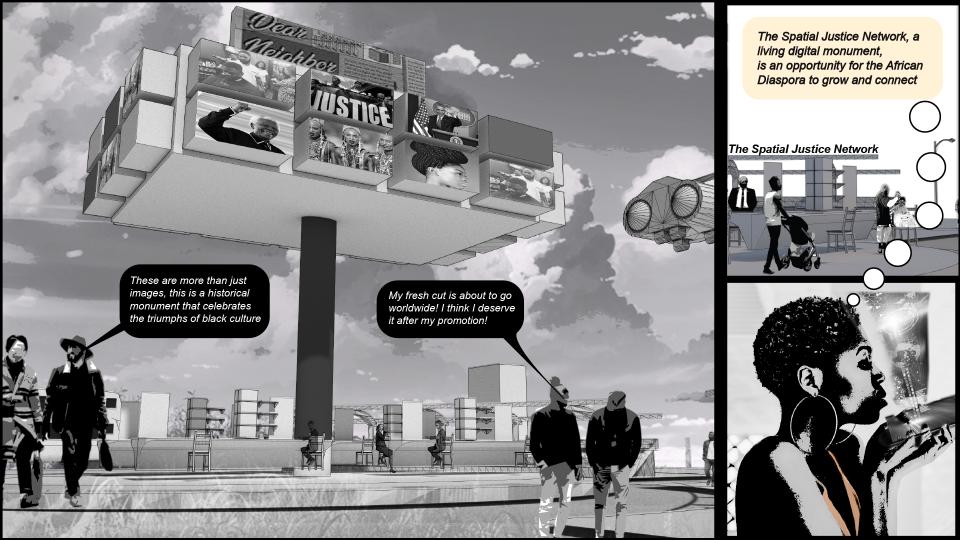 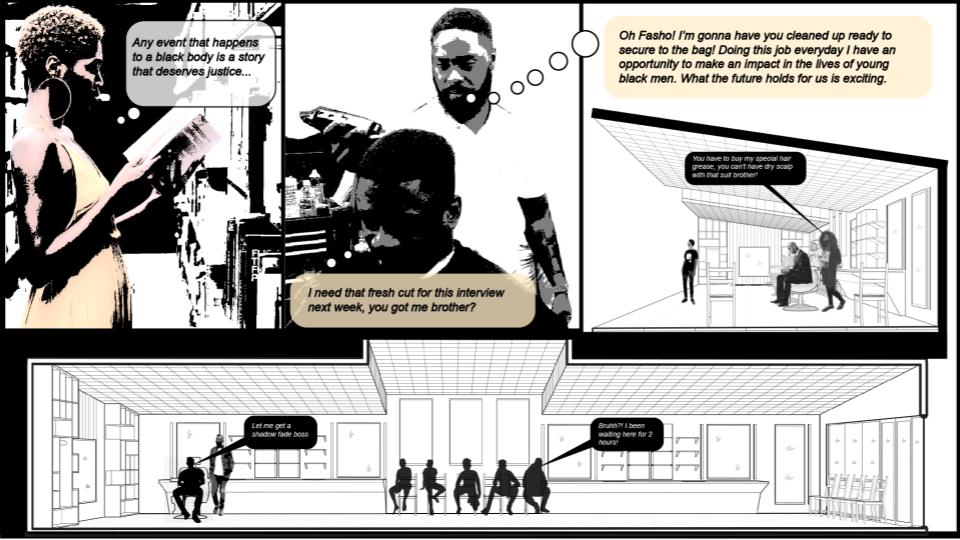 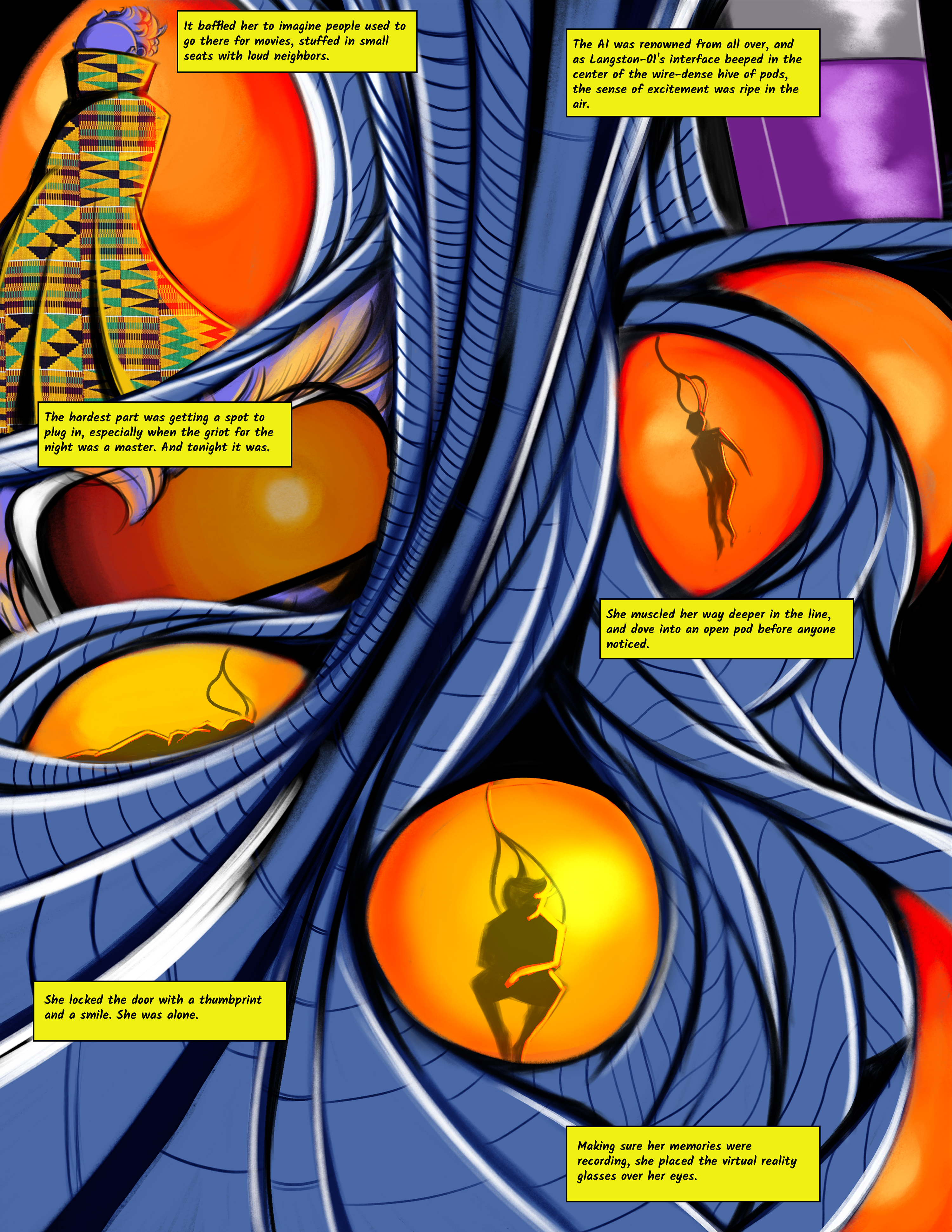 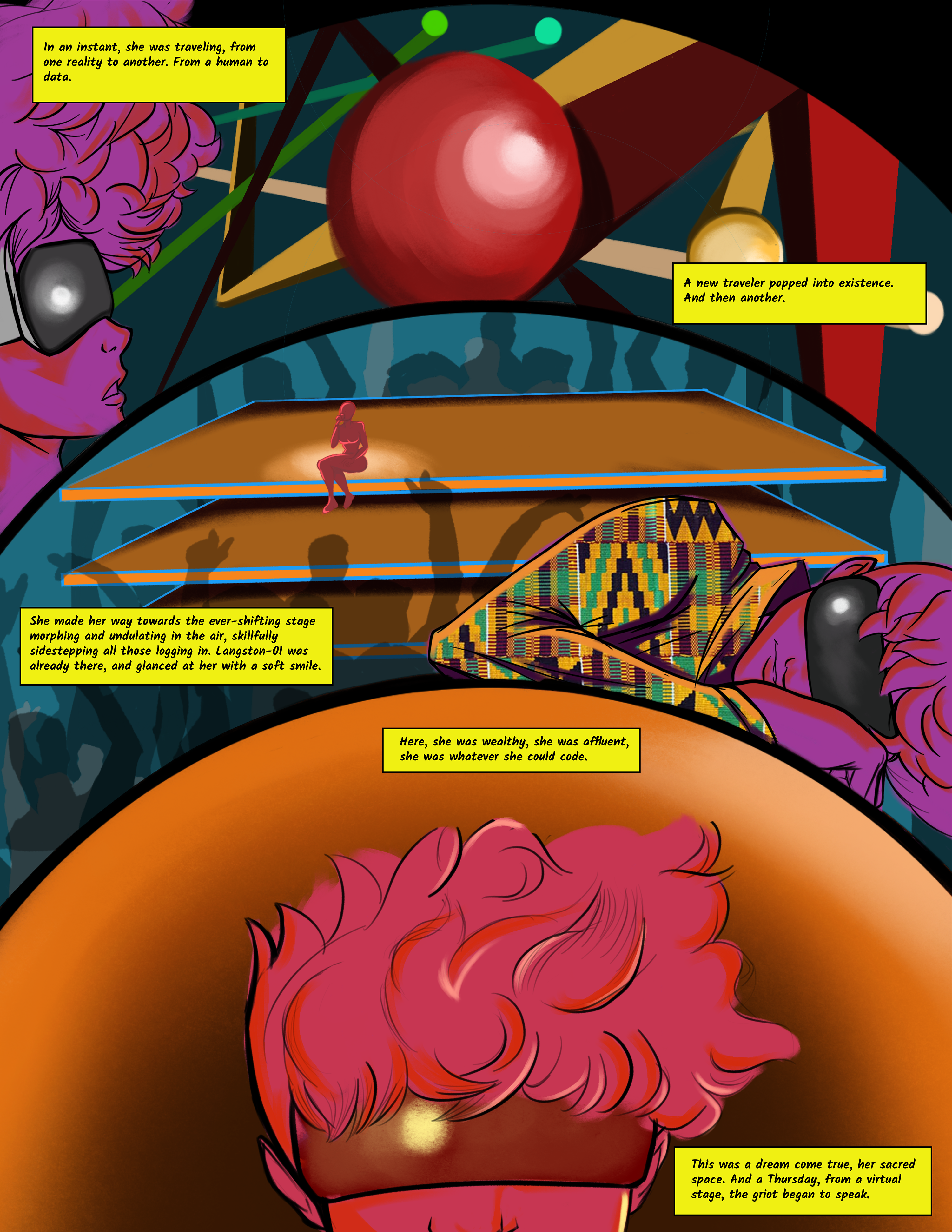 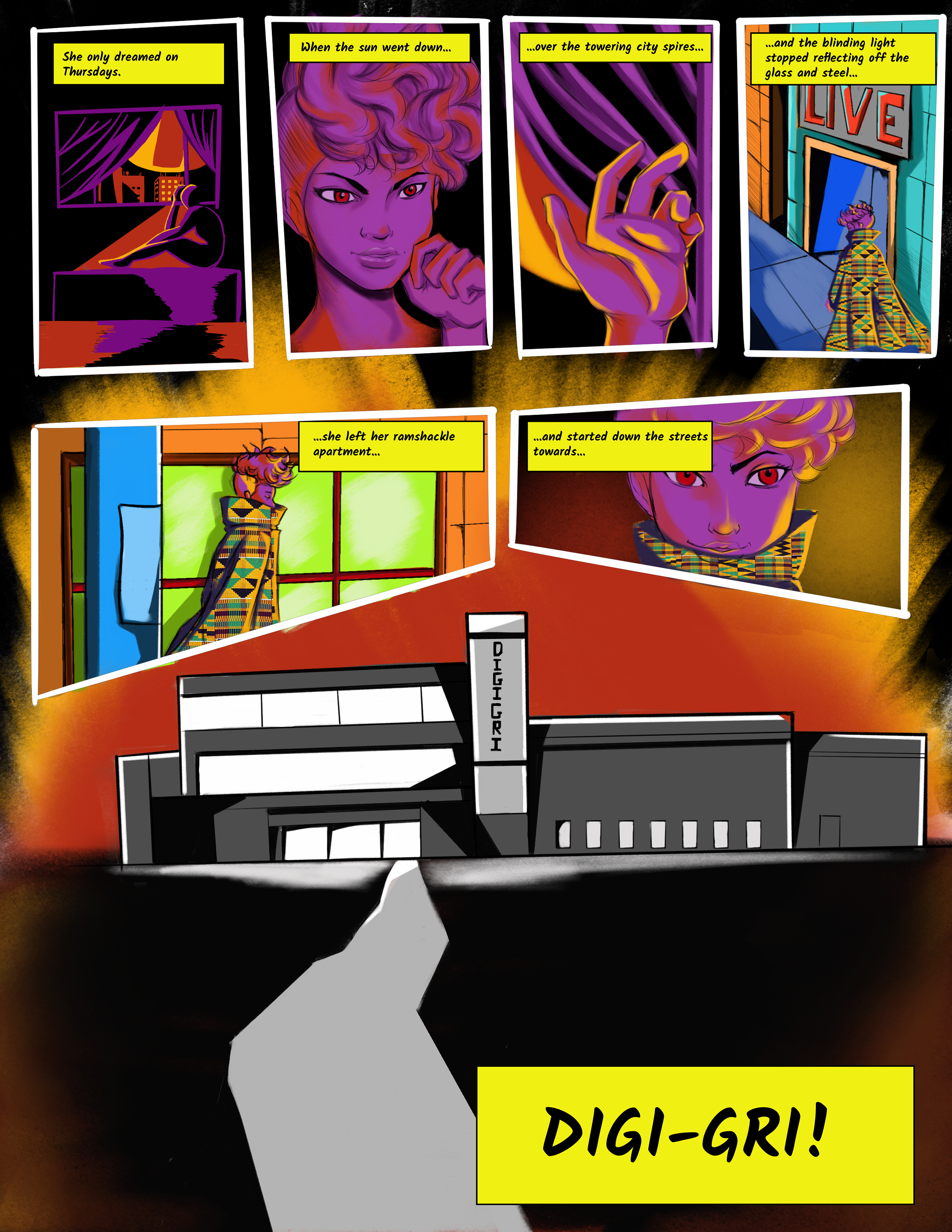 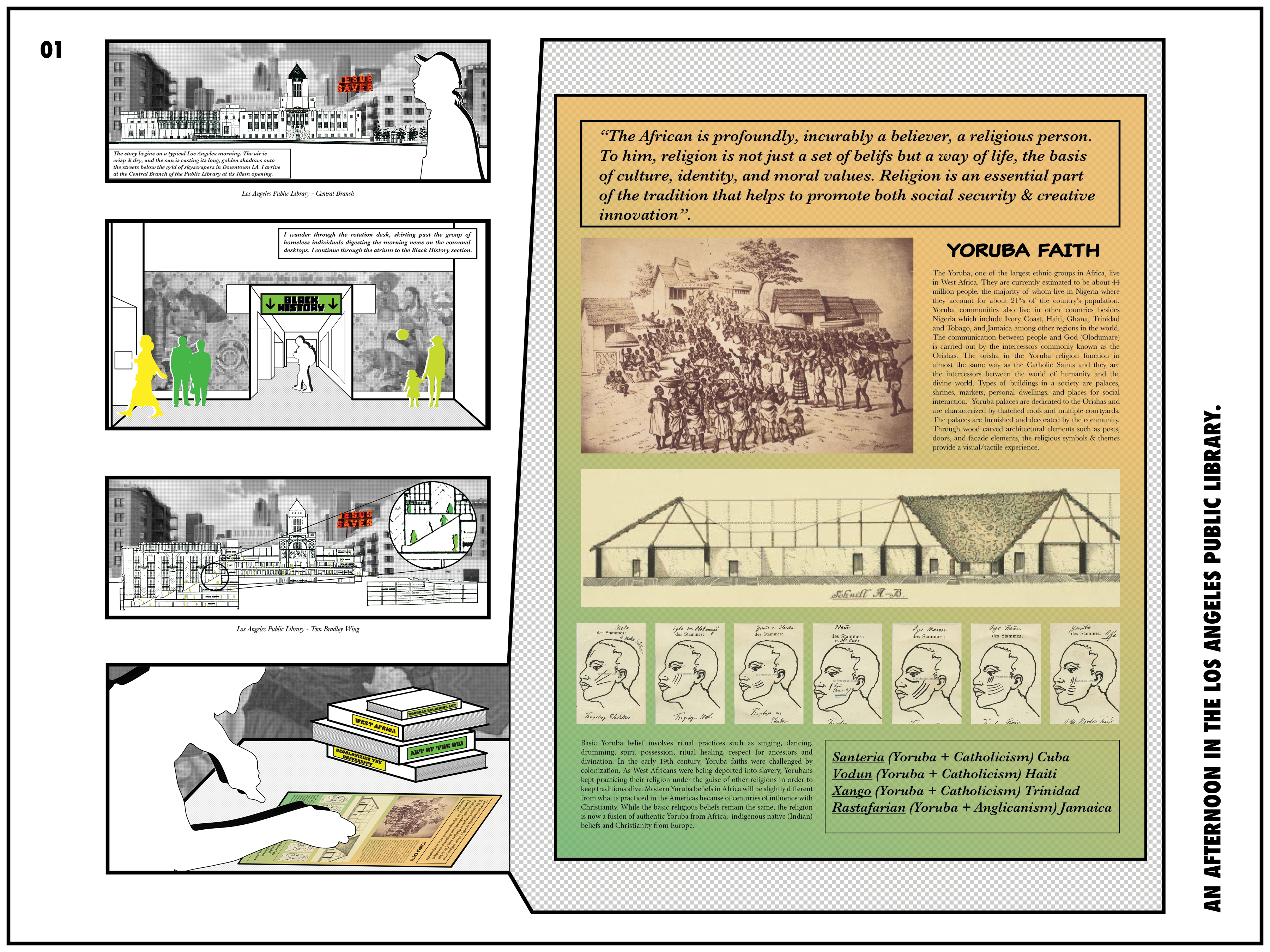 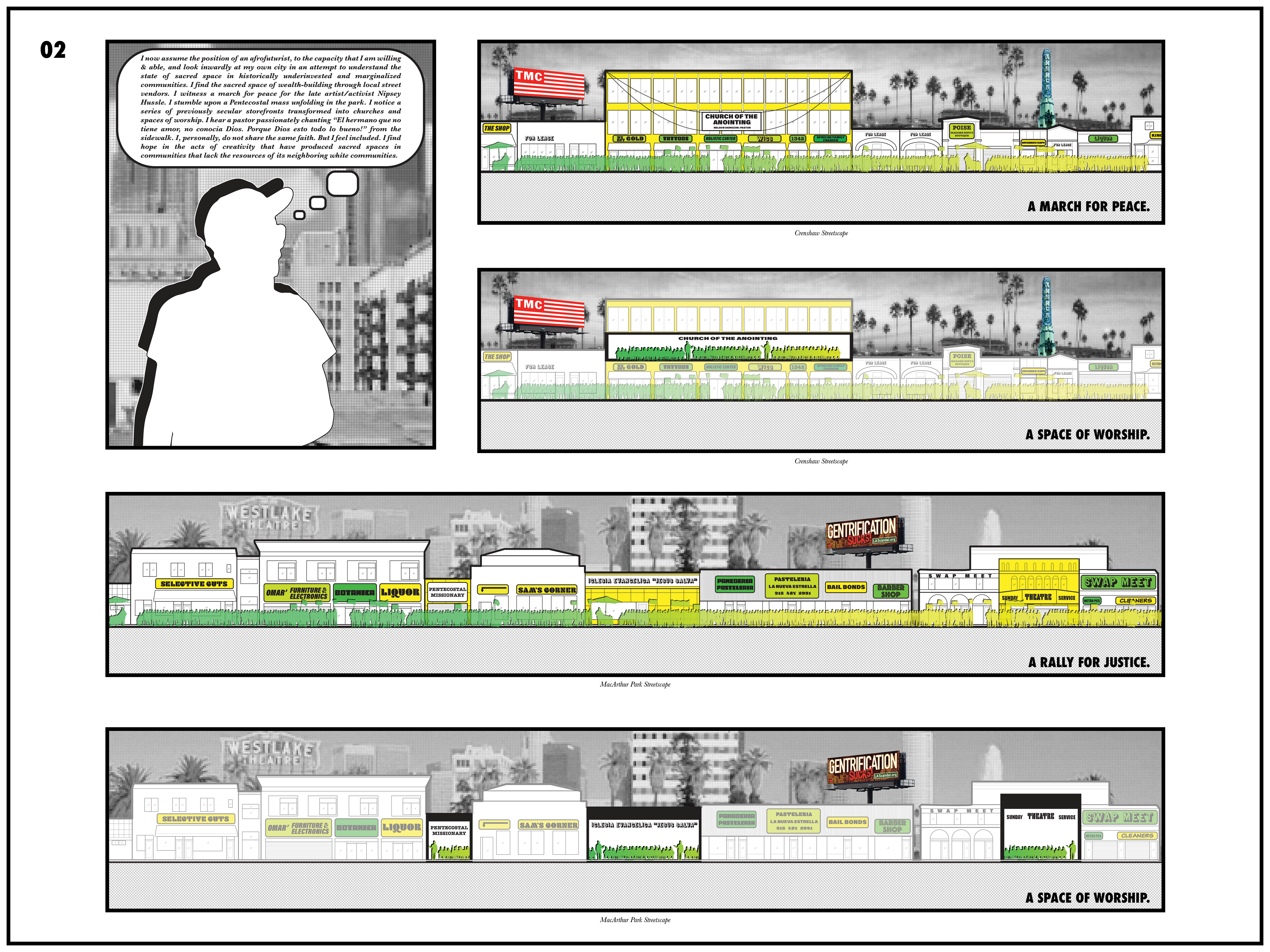 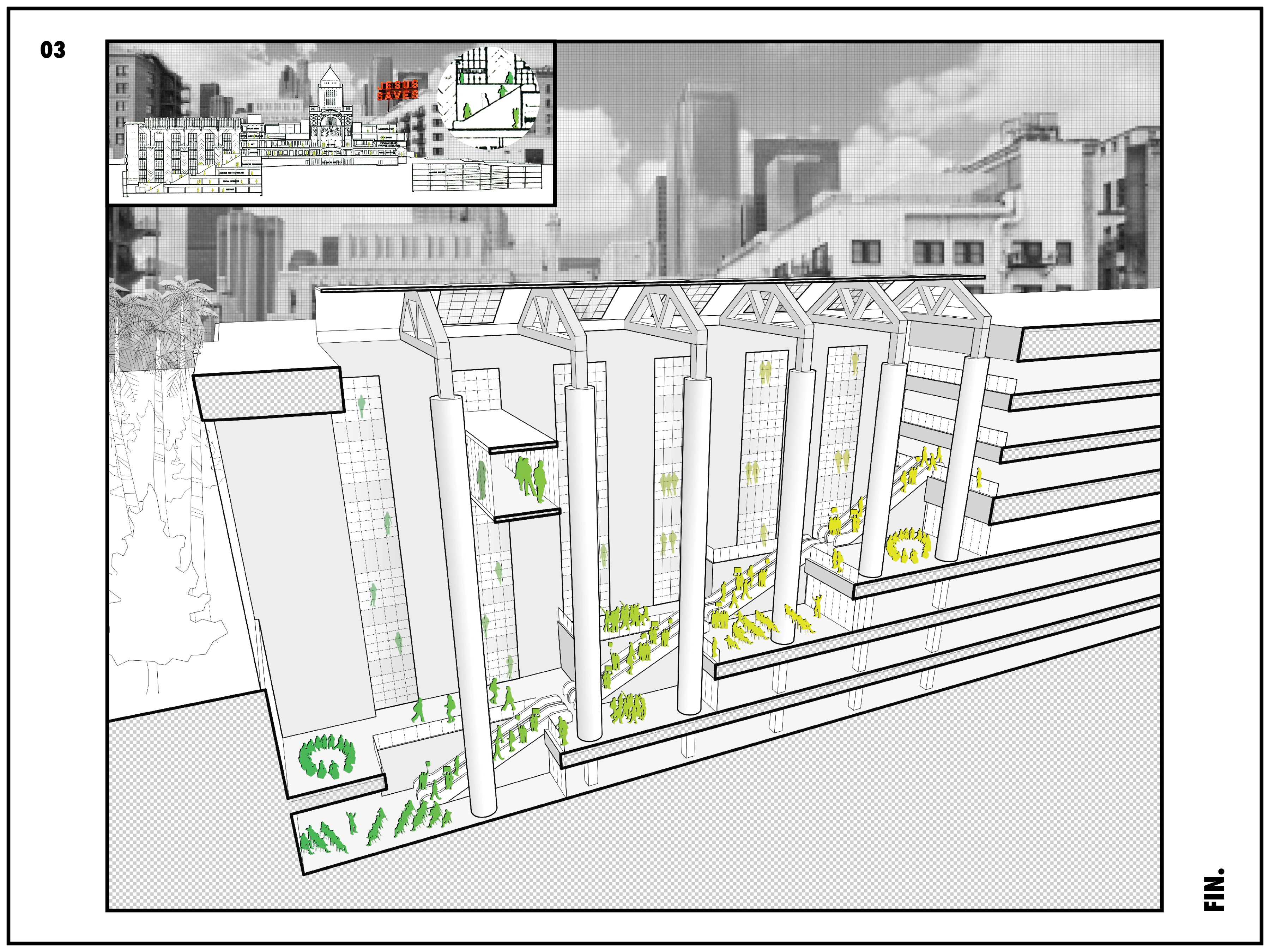